A HISTORIC MOMENT FOR MAISON PERRIER-JOUËT 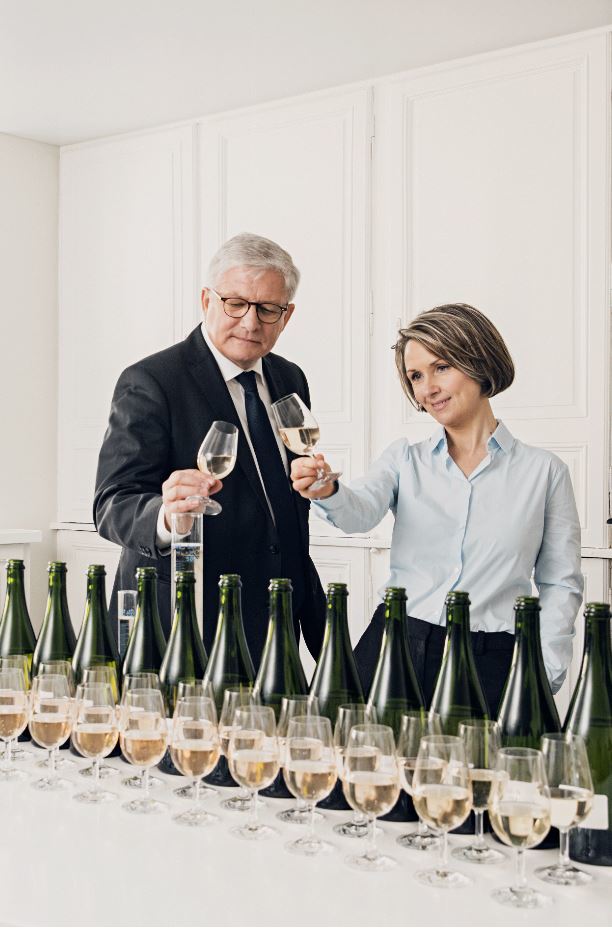 The transmission from one cellar master to the next is a key event for any champagne house, but for Maison Perrier-Jouët, which has had just seven cellar masters in over 200 years, it is truly a historic moment. In October 2020, Séverine Frerson will become the eighth cellar master – and the first woman to hold the position – in the history of the House, which was famously founded from the union of Pierre-Nicolas Perrier and Rose-Adélaïde Jouët in 1811.

She succeeds Hervé Deschamps, whose retirement brings to an end a transition period during which he and Séverine Frerson have worked side by side, welcoming wine critics, sommeliers and friends of the House, touring international markets, tasting the rare cuvées in the Oenothèque Perrier-Jouët, and blending the wines from the 2019 harvest, which promises to be an excellent year. Along with the historic cellar books containing the notes and observations of all his predecessors, and the key to the legendary Eden cellar, where the most precious vintages are kept, Hervé Deschamps will hand over to his successor the responsibility for perpetuating the unique intricate floral style of Maison Perrier-Jouët – and for taking it forward into the future. 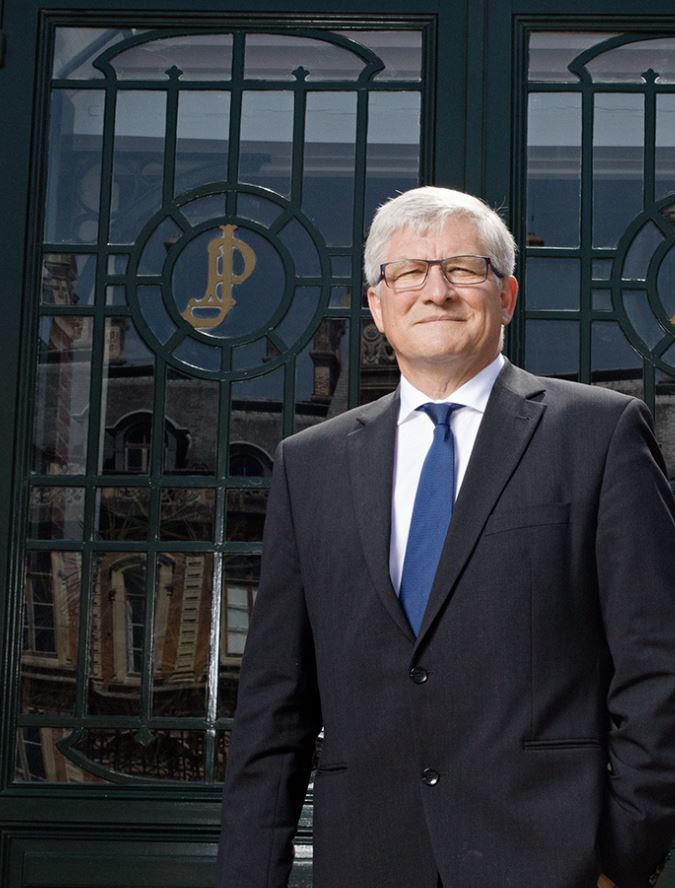 For the retiring cellar master, this is a particularly poignant moment, evoking memories of the close relationship he forged with his own predecessor, André Baveret, who spotted his talent and encouraged him to develop it. He vividly remembers the older man’s parting advice, when he left Hervé Deschamps in sole charge back in 1993: “Keep Perrier-Jouët where it belongs. It’s easy to make good wines with good grapes.”

Easy – probably not, but Hervé Deschamps has certainly kept Maison Perrier-Jouët right at the forefront of champagne houses, and indeed enhanced its renown in many ways. It is a legacy he can look back upon with pride, particularly since he has roots deep in the limestone soils of the Champagne region. “My grandparents were winegrowers in the Côte des Blancs,” he recalls. “I loved to help my grandfather with the vines and taste the grape juice fresh from the press at harvest time. My attachment to the land and my passion for champagne were formed early on.”

Hervé Deschamps joined Maison Perrier-Jouët at the age of 26, following his military service and studies in oenology at the University of Dijon. He recalls being received by André Baveret in his office, where the smell of wine always lingered – his first encounter with the man who would become his mentor. He credits André Baveret with instilling in him the visionary dimension of a cellar master’s expertise. “In the beginning, I had what you might call a ‘Burgundy sensibility’ – a preference for rich, mellow wines,” he explains. “André Baveret transformed this, tasting after tasting, into an instinct for champagne, teaching me to look for the lightness and finesse without which the evolution of the wine is inevitably limited.”

While his sensibility for the Perrier-Jouët style was honed over many years, in another key respect Hervé Deschamps was already a perfect fit, sharing a life-long love of botany with the founders of the House. The unaffected ease and laser-like precision with which he describes each Perrier-Jouët cuvée in terms of specific flowers and fruit draws on his encyclopaedic knowledge of the subject. A keen gardener, he takes pride in cultivating two varieties of Japanese anemone, one pink, one white, the latter the very flower represented by the Art Nouveau master Emile Gallé on the bottles of Perrier-Jouët Belle Epoque. 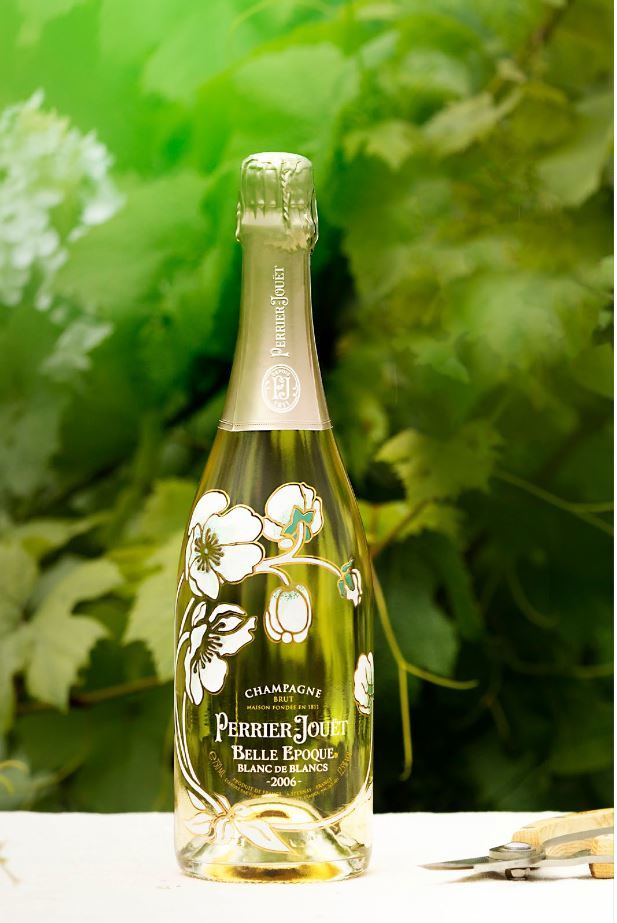 What Hervé Deschamps has also cultivated, during his career with Maison Perrier-Jouët, is an entirely new dimension of the cellar master’s role – that of ambassador – which has become a blueprint for many champagne houses. He has tirelessly crisscrossed the globe, significantly raising the international profile of the House, as his natural sociability and passion for his craft have enabled him to connect with wine experts and amateurs beyond the barriers of language and culture.

If this can be described as Hervé Deschamps’ immaterial legacy, he leaves a material legacy that is equally impressive, notably two emblematic cuvées: vintage Perrier-Jouët Belle Epoque Blanc de Blancs and classic Perrier-Jouët Blanc de Blancs. Together, they crystallise the House’s historic savoir-faire in revealing the quintessence of Chardonnay, the white grape variety chosen by the founders as their signature. Sourced from two small parcels of vines within Cramant, one of the most prestigious Grand Cru villages in the Côte des Blancs, Perrier-Jouët Belle Epoque Blanc de Blancs is the sublime expression of a single grape variety, a single terroir and a single year – a champagne shimmering with golden light, whose freshness and purity are the exhilarating prelude to an explosion of lush floral notes. In 2017, Hervé Deschamps completed the classic collection with Perrier-Jouët Blanc de Blancs, a vibrant, spontaneous champagne overflowing with aromas of tangy citrus and hedgerow flowers.

Hervé Deschamps is also the cellar master who represented Maison Perrier-Jouët at landmark moments in its history, not least its 200th anniversary in 2011. In the run-up to the bicentenary, he gathered the world’s leading wine critics around a “verticale” tasting of vintage cuvées spanning almost two centuries, which revealed the remarkable consistency of the Perrier-Jouët style. The culmination was the tasting of the 1825 vintage, bottled by the founders and thought to be the oldest champagne in the world. Hervé Deschamps recalls the intense emotion of raising the glass to his lips and the utter amazement of discovering the finesse and elegance of this legendary cuvée, which amply compensated for the difficulty he had in removing the cork!

Last but not least, Hervé Deschamps was the initiator, in 2008, of Perrier-Jouët By & For, the exceptional experience resulting in the creation of an entirely bespoke champagne capturing the personality and preferences of a chosen individual. The concept, recently renamed Bespoke, was inspired by Maison Perrier-Jouët’s tradition of personalisation, which began with Charles Perrier, the son of the founders, who tailored cuvées to the tastes of his customers. In this, as in many other respects, Hervé Deschamps has not only perpetuated the heritage of the House, but also added a new dimension – a mission that now falls to his successor. 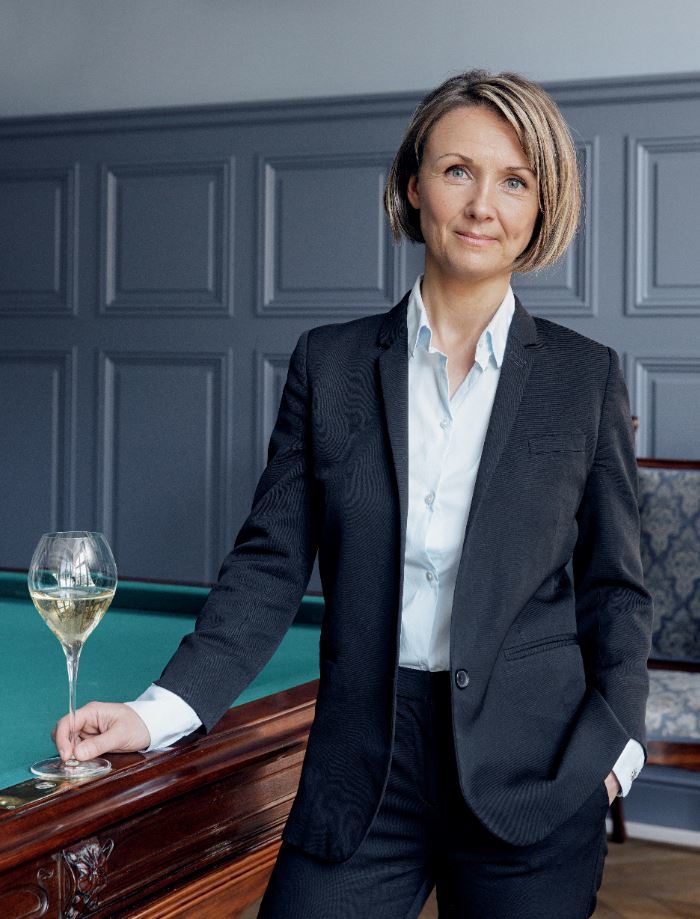 Séverine Frerson: a woman at the pinnacle of her profession

Passion. Memory. Intuition. For Séverine Frerson, these three words have an almost talismanic significance. Passion, first of all – a passion for wine, which led her, when she was barely 15, to choose oenology as her future career… and to stick by her decision in defiance of those who told her it was a man’s world. That same passion – not to mention a fair measure of talent and determination – has seen her reach the pinnacle of her profession, as one of the first female cellar masters at a leading champagne house.

Memory, next – and some of Séverine Frerson’s earliest recollections are bound up with champagne. A native of the region, yet not from a family of winegrowers, she has vivid memories of days spent with friends who tended vineyards in Verzenay. She recalls the excitement of the grape harvest and the odour of the presses, just as she remembers the smell of her grandmother’s homemade strawberry jam – of which she was strikingly reminded the first time she tasted Perrier-Jouët Blason Rosé, with its luscious aromas of red fruit.

Lastly, intuition, which guides her in both her personal and her professional life. Professionally, when she is selecting the clear wines that will become part of a blend, she will often choose one without first looking at its cru, in order to taste it without preconception. A single tasting is all Séverine Frerson needs to remember a wine, after which she classifies it in one of the myriad tiny drawers that make up her mental library. 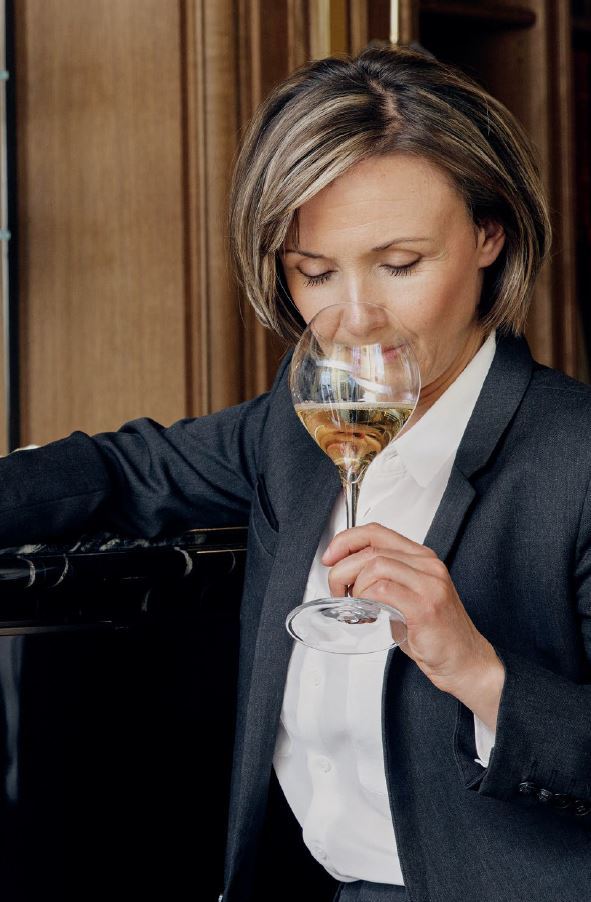 As she steps into her new role, Séverine Frerson feels a special affinity with the cultured, spirited young woman from a family of Normandy merchants whose name is one half of Maison Perrier-Jouët. “Quite apart from the romance of her relationship with Pierre-Nicolas Perrier, I see Rose-Adélaïde Jouët as a woman of character and independence, just like I am,” she says. “When I was looking through the archives, I found that she took an active role in receiving visitors and presenting the House and its cuvées. She placed great importance on exchange and conviviality, which is exactly what I do myself. I would never, for example, taste wines on my own – it’s an experience I always want to share with others.”

When it comes to tasting wines, Séverine Frerson’s personal sensibility emphasises texture. Even as a child, she remembers feeling compelled to touch the leaves and the grapes on the vine, and – over the course of two decades in the profession – she has honed her sense of touch until it has become almost as important to her as her sense of smell. Now, as cellar master, she is drawing her team into her innovative approach, linking Maison Perrier-Jouët’s language of flowers with the language of texture as she sets her sights on ever greater precision and perfection.

To perpetuate the style and quality of the House while ushering it into a new era is a challenge to which Séverine Frerson will surely prove more than equal. Having evolved in symbiosis with nature since it was founded, Maison Perrier-Jouët is stepping up its environmental initiatives to meet ambitious targets. It has already achieved the French government’s High Environmental Value certification, as well as the Sustainable Viticulture in Champagne label, and is currently implementing a zero-herbicide policy in its vineyards, experimenting with innovative growing practices and machinery, and increasing its contribution to the circular economy. From navigating the vagaries of climate to spearheading new, more sustainable methods of viticulture, Maison Perrier-Jouët’s eighth cellar master will need all her passion and intuition, not to mention her considerable reserves of energy and resourcefulness. “So much the better,” she says. “I hate routine!”

About Perrier-Jouët Founded in 1811 in Epernay, Maison Perrier-Jouët is one of France’s most historic champagne houses, but also one of its most distinctive, renowned for its floral and intricate champagnes which reveal the true essence of the Chardonnay grape and an enduring tradition of savoir-faire – an unparalleled expertise of only seven Cellar Masters since its foundation. A boutique house with a family spirit, Perrier-Jouët has been profoundly influenced by its founders’ love of nature and art – twin inspirations which allow it to create exceptional experiences and moments of wonder that enhance everyday life. Since its 1902 collaboration with Art Nouveau pioneer Emile Gallé, creator of the anemone design for its Perrier-Jouët Belle Epoque prestige cuvee, Perrier-Jouët has commissioned work from established and emerging artists including Bethan Laura Wood, Daniel Arsham, Noé Duchaufour-Lawrance, Miguel Chevalier, Makoto Azuma, Tord Boontje, Studio Glithero and Simon Heijdens, and more recently Vik Muniz, mischer’traxler, Ritsue Mishima, Andrew Kudless and Luftwerk. 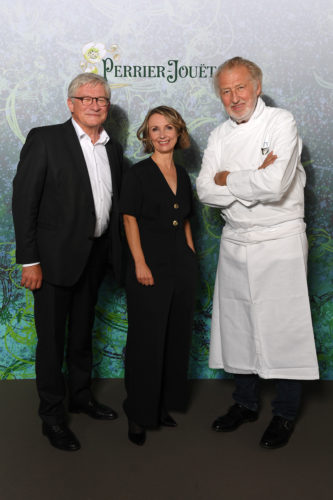 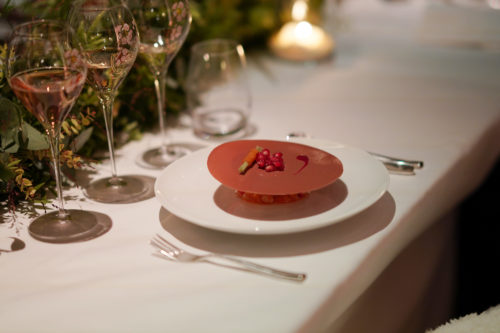 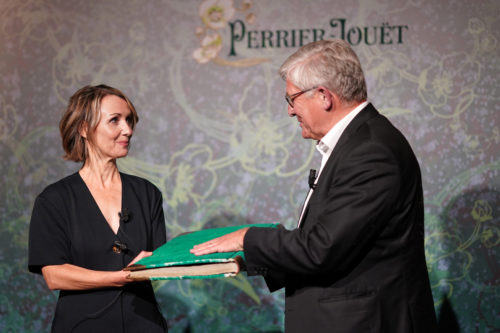 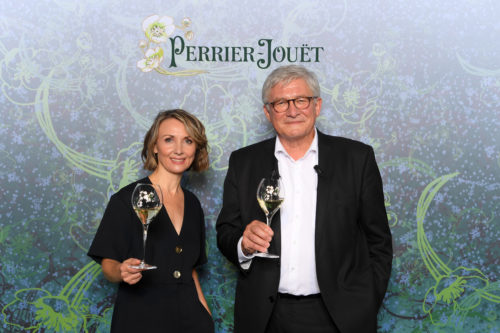 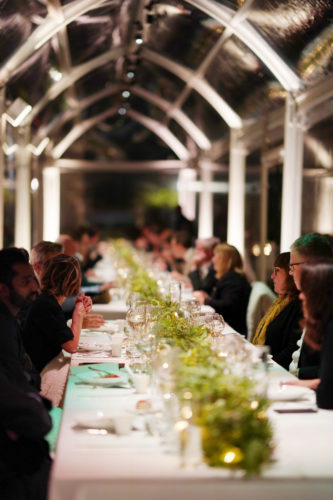 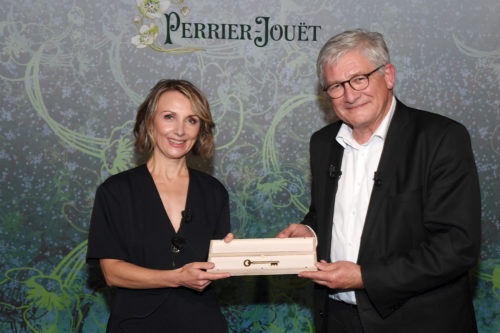 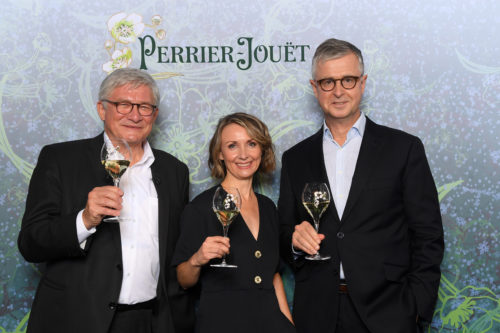 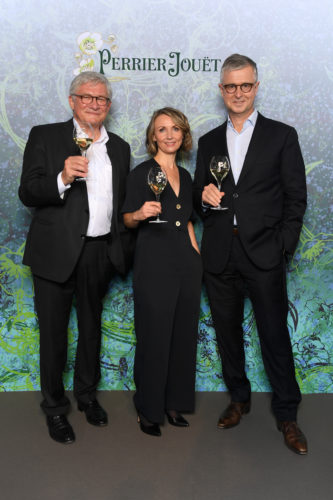 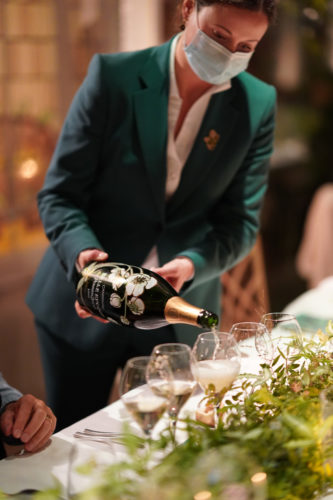 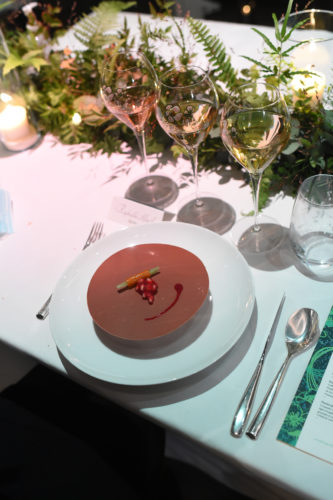 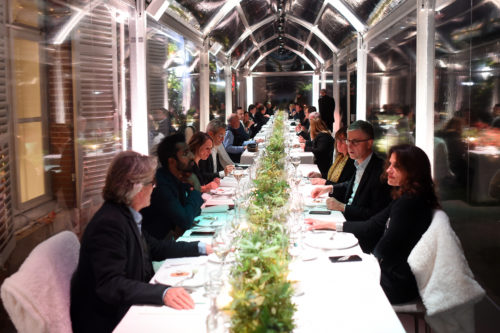 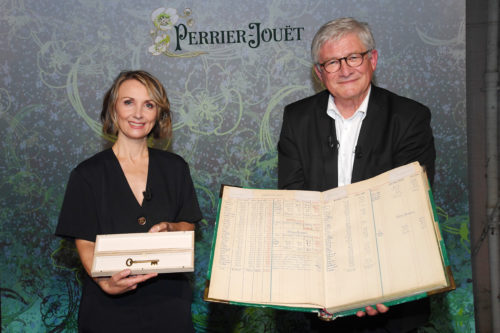 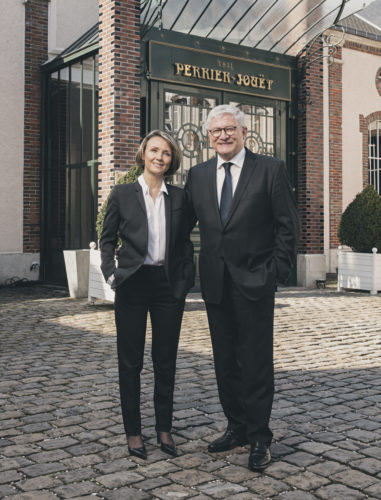 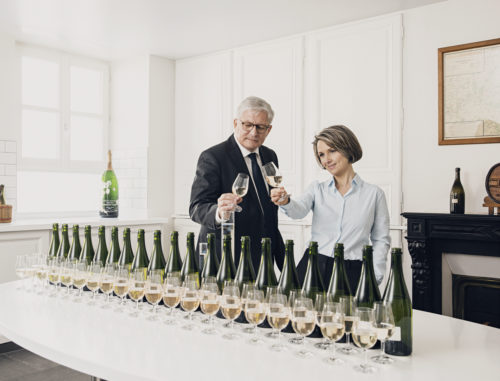 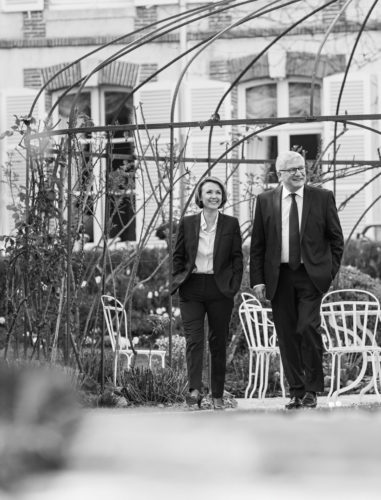 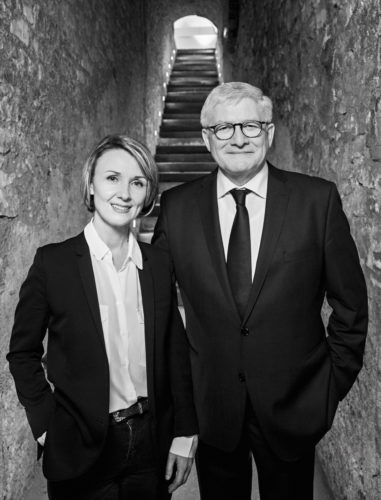 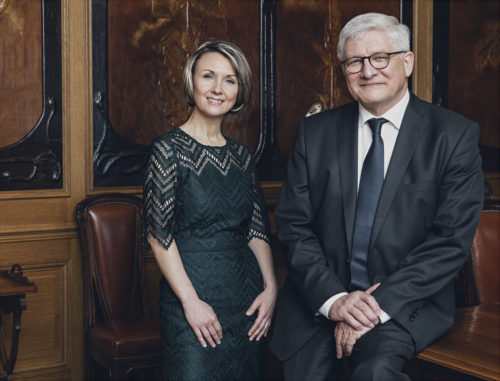 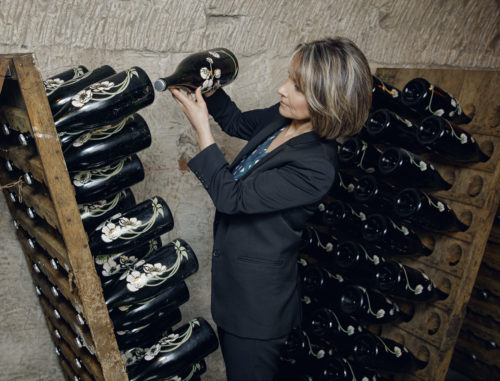 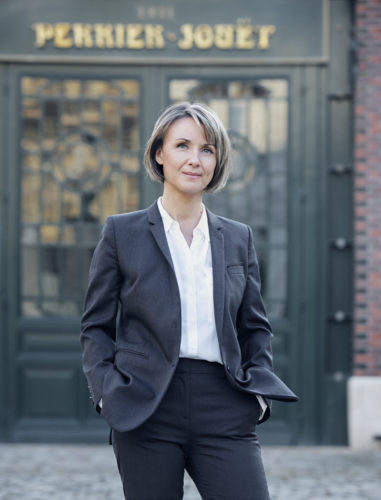 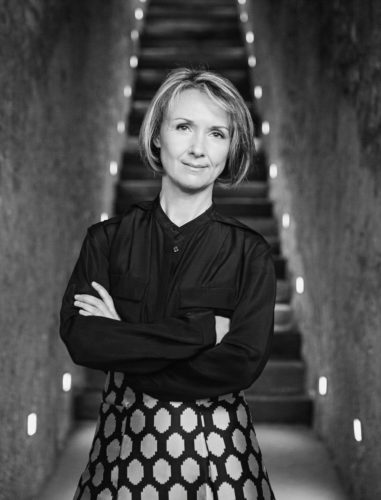 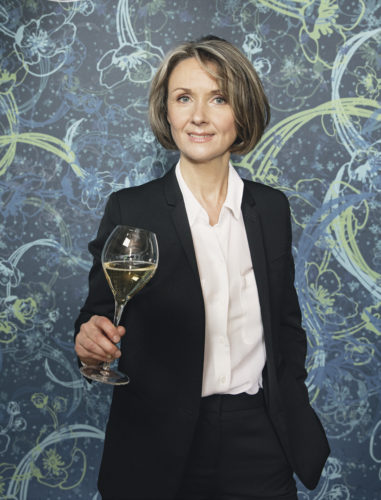 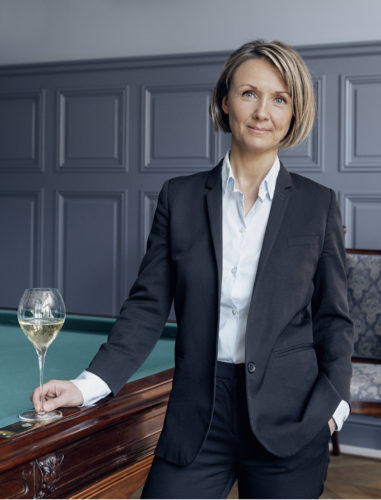